Note: This is a post about the Law of Attraction (LOA). For a background on LOA click here. :) 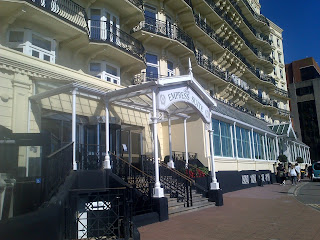 Back in 2016 I wrote a post about manifesting some perfume I liked which had felt "felt out of reach" for me before. You can read that here: https://fallingpetalsuk.blogspot.com/2016/01/manifestation-story.html

Today I thought I'd share another "manifestation story". This time it's about The Grand Hotel in Brighton. :)

The Grand Brighton is a luxury hotel on the seafront. I've wanted to visit it for years but never had a chance to go, I couldn't afford to stay there or anything. (I did once know someone who worked there, so I suppose there was a slight link!). I put it on my Life List (like a bucket list) about 10 years ago! Last year I looked up afternoon tea there but it was quite expensive for me and I couldn't afford it at the time.

I belong to some Meetup groups and a few months ago one of the groups scheduled afternoon tea at The Grand. I really wanted to go, but the deposit was £20 and I couldn't afford to pay it at the time. Some of these events get filled up quickly, but I thought if that happened perhaps I could go on the waitlist. A couple of months later I was able to pay the deposit and there were still spaces, so I was able to go.

I went yesterday and had a nice time. We had sandwiches and little tomato tarts to start, then fruit and plain scones with jam and cream (I'm not keen on jam and cream, but the cream was fairly nice) and desserts like little buns, chocolate mousse type puddings and little jellies. It was a lovely day weather wise as well. Here's a picture of the dessert stand: 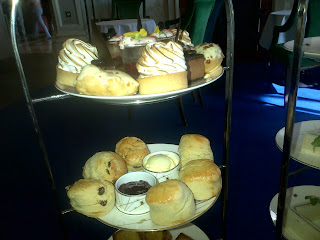 So this isn't a really big manifestation story, but I wanted to share it because visiting The Grand was something I'd wanted to do for a long time. I started my Life List in 2009, so it was around 10 years ago that I wrote it on there. I never really had an opportunity to go before and then I read about the afternoon tea, but it seemed expensive at £29.95. Then joining Meetup gave me a chance to go, and paying the deposit beforehand meant there was less to pay on the day. I know money is a block for a lot of people and I completely understand. Sometimes I feel that we're told we just need to have an "abundance mindset" but that isn't necessarily easy if you're really struggling for money. If that's the case it doesn't do any good to beat yourself up and feel guilty because you're "not trying hard enough" to change your beliefs or vibration or something! I believe we can shift our beliefs on this but it may take time.

I've talked before about shifting limiting beliefs, but I do find it quite a hard process at times. (I know what I wrote above about it taking time to shift them sounds limiting, but I'm working on changing my mindset!). It was also quite daunting for me taking the bus and walking through Churchill Square to get there, since I have anxiety. I'm glad that I did it though.

I've been having quite a hard time lately, especially after my boy cat died last month. :( I've been feeling quite down. As I wrote in my LOA Round-up post, I often feel quite stuck because I don't seem to see any massive shifts for the better in my life. I wrote a post last month about manifesting when you have mental health issues, and it's a subject I'd like to explore more. You can read Part 1 here if you'd like to: https://fallingpetalsuk.blogspot.com/2019/08/manifesting-and-mental-health-part-1.html

However I enjoyed the experience of going to The Grand and it gave me hope that maybe I can manifest "bigger" things too, such a holiday to Hawaii. Also I thought it would be good to write about it and hopefully others can find some inspiration too. Hope you liked the post. :)

Have you manifested anything you've wanted for a long time? Please share your story. :)
Posted by Moonsparkle at 14:38