Going to the beach
Chocolate milk
Cadbury Mini Eggs- they're in the shops already!
Mike Dooley's (TUT) 30 Days of Infinite Possibilities project
Spyro: A Hero's Tail- I've been replaying it.
Library books
Wimpy
Amanda Galatica's free 30 Day Prosperity Course- Get it when you sign-up at her site: http://amandagalactica.com/

Posted by Moonsparkle at 20:19 No comments:

I don't normally post on here on a Tuesday but I just created a new Resources page, so I thought I'd do a quick post about it.

It contains a list of all the self help/personal development and Law of Attraction (LOA) websites and books I've found useful over the years. I hope other people find them useful too. :)

It's on the sidebar on the right of the blog and I'll also link to it here: http://fallingpetalsuk.blogspot.co.uk/p/resources.html
Posted by Moonsparkle at 23:48 No comments:

I write about the Law of Attraction (LOA) on here and today I thought it would be nice to share a manifestation story as an example that it does work. :)

I like to go in Marks & Spencer (department store) sometimes and have a look around. There's a perfume they sell there called Rose Imaginaire by Roger & Gallet. I've liked it for ages but at £32 it was a bit expensive for me (also £32 felt like "too much" to spend on perfume). So whenever I went in there I would try on some from the sample bottle they had. Sometimes I would go in there just to try it on, lol.

Then just before Christmas I went into Marks to try some on again and there was a saleswoman who was selling the Roger & Gallet perfumes. I tried different samples and she gave me a sample of another one called Fleur de Figuier. I found out from her that they do smaller bottles for £17. (I think the smaller bottles were there before but I hadn't noticed them).  I'd received some money from a relative for Christmas, so a few days after talking to the saleswoman I went back and bought the smaller bottle of Rose Imaginaire for £17. :)

Here's a picture of the perfume: 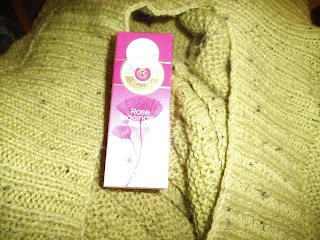 Click here to read more>>
Posted by Moonsparkle at 20:32 No comments: